Tickets > https://ticketexpress.in/event/luxe-the-luxury-expo/748?fbclid=IwAR21uqh87hcMLa5tmXPS6Ar-Qr9zKGx61LQA7jVav9uKHSMGsotXwSA5pMI <
LUXE – The luxury expo is an ultimate experience to the king-lifestyle. A wide range of Luxurious Cars, Super-bikes, yachts, jewels, accessories, home decor and the list goes on. For every whose who of city who selects luxury living to come and experience the best of the best in everything that redefines Luxury. A treasure trove comprising the most awe-inspiring collection of Luxury Goods, Luxe is one of the most talked-about high-end Luxuries exhibitions in the region.

Luxe is an essential exhibition to Enthusiasts, collectors and fanatics to experience the magic of luxury goods.

Would I be allowed in case I am late for the show? : Yes
Is re-entry allowed?: Yes
Are children allowed for the event (specific age to enter)?: Yes
Over all Capacity of the venue: 2000+
Venue for Parking? : Yes
Is parking free or chargeable? : Free. Limited
Inventory: 500

Xtreme Fight Federation is India’s Premier Mixed Martial Arts Fight League and Training Academy. 16 of India’s Top MMA athletes go head to head, live, in battles for glory! That’s not it, this time the fight is going live in a pentagon! Now this is something you wouldn’t want to miss!
@ YMCA: Bandra,
Carter road, Bandra West, Mumbai, Maharashtra 400052, India

Working for a city magazine, the woman had gone for an assignment to Shakti Mills compound near Famous Studio around 6 pm.

A woman photographer was allegedly gang-raped by a few men in Mahalaxmi area in Mumbai on Thursday evening.

Maharashtra Home Minister RR Patil told dna that the government had taken serious note of this and that they will do everything possible to nab the culprits.

Working for a city magazine, the woman had gone for an assignment to Shakti Mills compound near Famous Studio at around 6 pm. She was accompanied by a male colleague. It is not clear whether he was a journalist as well.

According to initial reports, the two visited the mill to take photographs. They were then told by a group of five men that they would require permission to take pictures. On this pretext, the duo was taken to a room where the male colleague was tied up and the girl raped.

The Shakti Mills compound is infamous for drug addicts. The girl reached Jaslok Hospital at Peddar Road at around 10 pm. Hospital authorities who treated her informed the NM Joshi Marg police about the case.

It is still unclear how the girl reached the hospital. The identity and number of men who violated her is not immediately clear. Police teams have reached the spot and are investigating the case. Three drug addicts have been picked up for questioning.

Three days ago, a US woman was also attacked by an unidentified man in a first class ladies compartment between Marine Lines and Charni Road station.

India’s top court Tuesday overturned an eight-year ban on dance bars in Mumbai by the Maharashtra state government, which said they were degrading and exploited women.

The Supreme Court’s decision upheld a 2006 ruling by the Bombay High Court that said the ban was discriminatory. The groups contesting the ban also said it violated their constitutional right to earn a living.

The government of Maharashtra in 2005 prohibited performances in dance bars, typically restaurants and pubs serving liquor, where owners pay dancers. Patrons can pay the dancers too, via a waiter. Patrons cannot touch the dancers, the petitioners said, according to court documents.

The Indian Hotel and Restaurants Association, the Association of Dance Bar Owners and the Bharatiya Bargirls Union were among those who challenged the state government’s ban in 2005. According to the petitioners, there were 2,500 dance bars in 2005 employing 75,000 women. The state government, however, said there were 307 licensed dance bars in Mumbai with around 4,300 women employed as dancers, waitresses and singers.

The petitioners said the state government’s ban was discriminatory because dance performances were allowed in other places like higher-end hotels and theaters. They also said women dancers wore traditional Indian clothes like sarees and that performances weren’t vulgar. 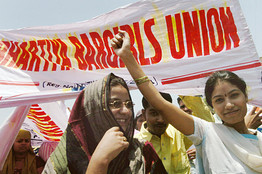 Sebastian D’Souza/Agence France-Presse/Getty Images
Women working at dance bars protested against the ban on performances in dance bars in Mumbai, May 3, 2005.

In a reply to the petition, the state argued that dance performances were degrading and that women were being exploited for financial gain by bar owners, according to court documents. The state also said dance bars were detrimental to public health, fostered prostitution and crime, and created problems in the daily life of the customers.

“The provisions are intended to abolish evil and immoral practices,” the state said in response to the 2005 petition.

The ban on dance bars was one of several steps authorities in Mumbai, India’s financial and entertainment capital, have taken to clamp down on perceived immoral behavior. Last year, police official Vasant Dhoble made headlines after a series of raids on bars, restaurants and hotels.

In one case, law enforcement officials raided the home of a 53-year-old woman on the grounds that she lacked necessary permits for making liquor-filled chocolates.

“We do not see as to why when women dance to earn their livelihood, it becomes exploitation,” the Bombay High Court said when it overturned the state government’s ban on dance bars in April 2006.

Following the top court’s ruling Tuesday, restaurants and bars will have to apply for new licenses before they restart dance performances, according to Veena Thadhani, a lawyer for the Indian Hotel and Restaurant Association. The licenses were canceled in 2005.

“The government’s ban had struck down an entire industry,” Shashikant Shetty, head of the Indian Hotel and Restaurants Association of India, told India Real Time. “This is a relief for a lot of people,” he said.