By LUKE AUGUSTUS FOR MAILONLINE

A footballer has died after a celebration went tragically wrong in India’s Mizoram Premier League.

Peter Biaksangzuala died in hospital on Sunday after falling on his head while attempting a somersault after scoring for Bethlehem Vengthlang FC – a club based in the north east Indian province of Mizoram. 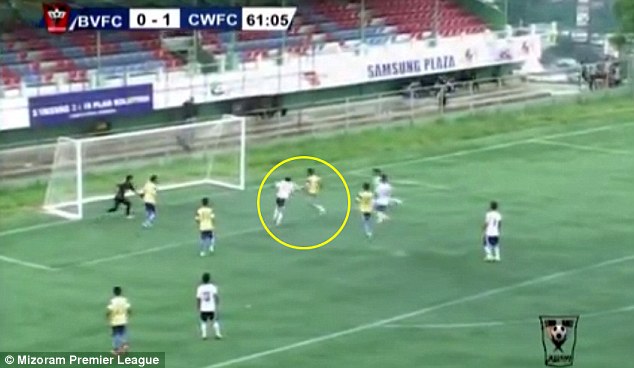 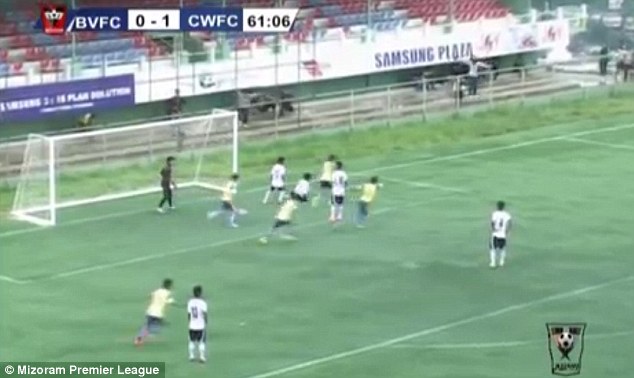 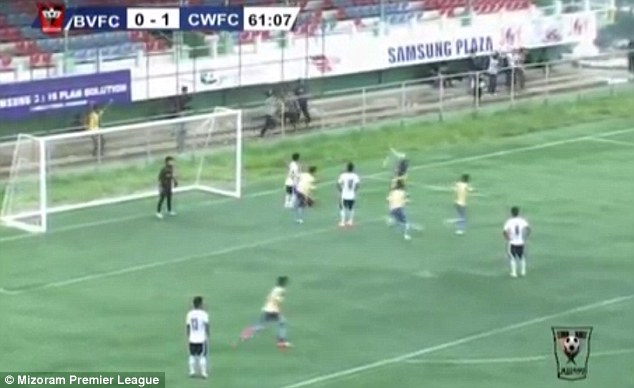 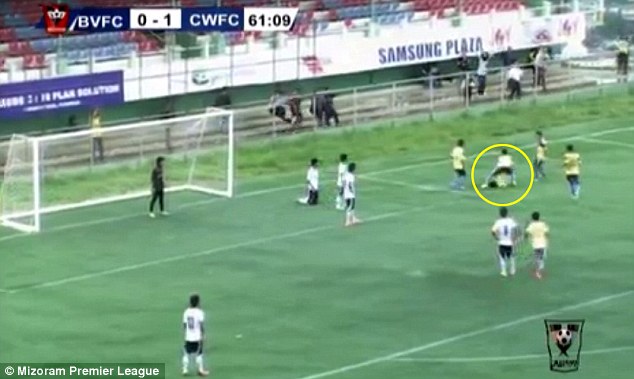 Biaksangzuala mistimed his landing and his head took the brunt of the fall.

Team-mates immediately rushed to his aid and he was carried off the pitch on a stretcher.

Biaksangzuala was rushed to Aizawl Civil Hospital where a CT scan revealed he had severely damaged his spinal cord and he was moved to an intensive care unit. 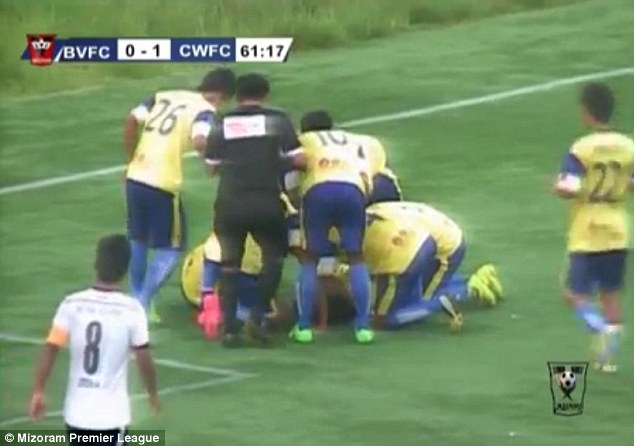 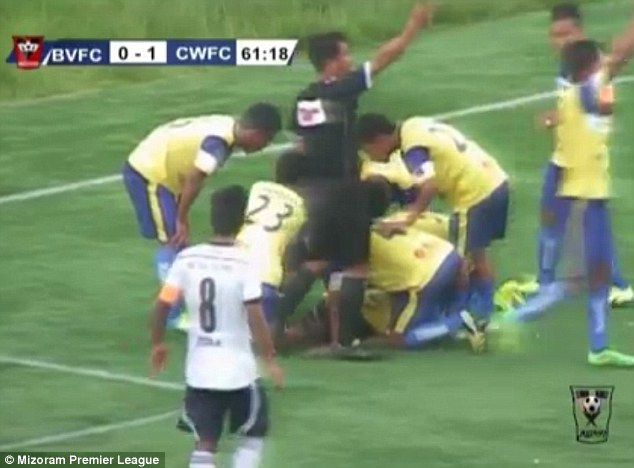 The Mizoram Premier League is at state level. Each state has their own league and on a national scale, play in the third tier of Indian football.

He spent five days in hospital, as doctors unsuccessfully attempted to heal his injuries, and was pronounced dead in the early hours of Sunday after being put on a ventilator.

A source said: ‘He was trying to do Germany’s Klose signature flip stunt, but it misfired unfortunately.’

Reports in India suggest that Biaksangzuala had donated his eyes during the time he spent in the hospital.

In memory of the midfielder, Bethlehem Vengthlang FC have retired his shirt No 21 with the Mizoram Football Association releasing a statement via their official Facebook page.

The statement read: ‘Bethlehem Vengthlang FC midfielder Peter Biaksangzuala lost his fight for survival after he suffered a fatal injury while celebrating his goal.

‘It has been a sad day for Mizoram football and the demise of the footballer shook his team-mates, footballers and fans alike all over Mizoram.

‘Peter’s club Bethlehem Vengthlang FC will retire his jersey no. 21.’

Bethlehem Vengthlang coach Danny Lalduhawma added: ‘Peter was a lad with good manner who always maintained his discipline on and off the pitch. I don’t think there are many like him.’ 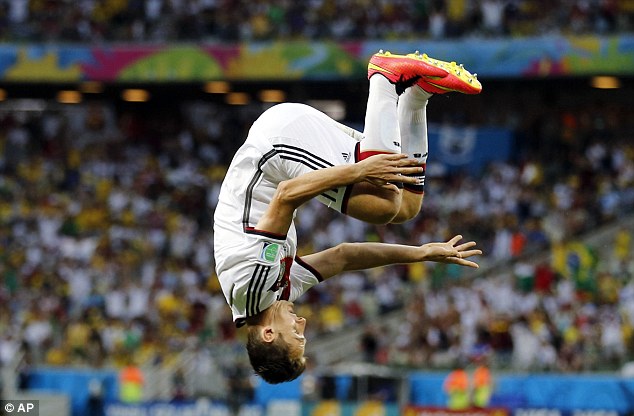 James Gandolfini AKA ‘Tony Soprano’ Died Today In Italy Of a Stroke At age 51 confirmed by HBO.  The Emmy-winning star of The Sopranos suffered a possible heart attack while in Italy, where he was attending the Taormina Film Festival.

2 Pac Bodyguard “Frank Alexander Found Dead In His California Home. Suicide or Accident?? — Frank Alexander, the bodyguard, author, producer, and friend of the late rapper Tupac Amari Shakur had been found dead in California. As rumors of a possible suicide swirled around the internet, Franks, family and friends reached out to Mstars News to dispell claims that Frank took his own life.

Richard “RJ” Bond, Franks friend and co-producer of Tupac Assassination, was upset by the allegations of suicide. In an email he wrote, “I can tell you that it was not a suicide, it was an accident…Please stop speculating.”

Will the police continue to investigate Frank’s untimely death, family members and friends said that Frank was happy, and “looking forward to the days to come.” Frank and Tupac were friends as well as business acquaintances.

When ‘Pac was gunned down on September 7, 1996 in Nevada, Frank was not present and often reflected on not being their in various interviews and documentaries. Frank has said that he wished he were there, and speculated as to whom he though could be responsible for Tupac’s death.

Frank spoke with the Sabotage Times about the accounts that lead up to Tupac’s assassination and shared who he thought may have played a role in his murder.

He revealed that Tupac got into a fight the night that he got shot, with Orlando Anderson, a Crip from the South side. Frank said that he thought that the fight between the member of the Crips Gang and Death Row may have played a role in Tupac’s untimely death.
“Yeah. If you get into a scuffle and you get you butt whupped, whatcha gonna do? You’re going to tell your friends,” he said told Sabotage Times. However when Tupacs black BMW was gunned down, Frank was pursuing other orders from his boss, which required him to be the designated driver another vehicle, because Tupac’s posse was under the influence.

Frank said that Suge Knight held him responsible for Tupac’s murder, and even ent has far as to issue death threats. “One of the bodyguards called me up and said, ‘Hey, if you don’t testify for Suge then they want you dead.’ I’m like. ‘Who does?’ and he goes, ‘Death Row,'” Frank said.
Tupac’s death weighed heavy on Frank’s heart and he paid tribute to his late boss and friend co-producing classic documentaries Tupac: Before I Wake (2001) and Tupac: Assassination (2009), as well as writing Got Your Back (1998), about his time’s with ‘Pac.
Prior to becoming a bodyguard, Frank served in the US Marines for 11 years, and was a champion amateur Bodybuilder, according to StreetHop. Watch a documentary on Tupac’s assassination below:

Awood “Mr. Magic” Johnson, a rapper best known for his work in the 90’s on the No Limit Records label, has died. Johnson, 44, and his wife of 13 years, Chastity, were killed in a fatal car crash Friday, March 1, in Hattiesburg, Miss. The couple’s daughter, 12-year-old Twila Wise Johnson, survived.

Johnson grew up in the 9th Ward of New Orleans, in a musical family: his mother was the gospel and jazz singer Juanita Brooks, who passed away in 2009. His uncle is R&B guitarist Detroit Brooks, Sr.; in 2012, Johnson recorded the song “Beauty” with his cousin, singer Detroit Brooks, Jr.

When Johnson decided hip-hop was his muse, his gospel and jazz-playing family was supportive, said Johnson’s sister Timisha.

“Our mom encouraged us to do whatever we were passionate about,” she said.

“Sky’s the Limit,” Johnson’s debut as Magic for No Limit Records, hit No. 15 on the Billboard 200 and No. 3 on the hip-hop/R&B albums chart. It featured cameos by Mia X, Mystikal, Fiend, Snoop Dogg, Soulja Slim and others; he followed it up with two more projects for the label. In the early 2000’s, along with many of its other prominent artists, Johnson left No Limit, which filed for bankruptcy in 2003.

Johnson released a final solo album, “On My Own,” for the Koch Records label – which would eventually absorb a reorganized No Limit – in 2003. The following year, he scored a hit with the single “I Smoke, I Drank,” as one-third of the Body Head Bangerz, a group that included New Orleans rapper Choppa and former boxing champion Roy Jones, Jr. In 2006, it was announced that Johnson had signed to the New York-based independent TVT Records, but he didn’t release any material, and the label dissolved in 2007.

Most recently, Johnson had released singles on his own Banx Entertainment label. In 2011, he “>appeared on a panel with fellow veterans Mystikal, Mos Def and Mannie Fresh to celebrate the fourth anniversary of the local Industry Influence monthly hip-hop networking event.

Watch an interview with Magic, filmed by the local hip-hop blog Mighty Muzik.

Timisha Brooks remembers her brother as a loving person, for whom his wife and family always came first.

“He made sure we stuck together after our mom passed,” Brooks said. After their mother’s death in 2009, she said, Johnson, who had been living in Florida, moved to Baton Rouge to be closer to the family.

“Everybody knows us as a team,” she said, “and he was very much the leader.”

“He was a passionate guy. He loved his siblings; he loved his wife. There’s a comfort in knowing that neither of them has to live without the other. That makes it more bearable.”

Funeral arrangements have not yet been made, Brooks said.

By Alison Fensterstock, NOLA.com | The Times-Picayune