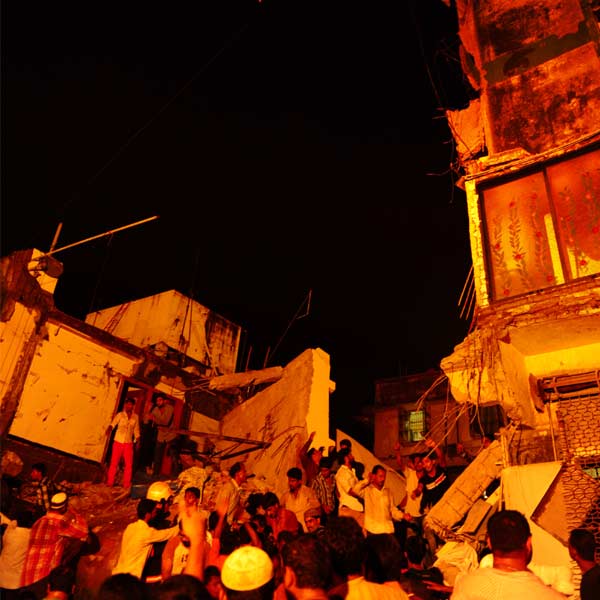 Part of a four-storey residential building collapsed in Mahim, Mumbai on Monday evening after there were incessant rains in the city for two days. The building is located near the famous Mahim dargah. One senior citizen was killed and five people injured.

“Residents are feared to have been trapped in the debris after a portion of the building on Cadell Road collapsed,” an official said.

The building called Altaf reportedly had a Maruti car showroom on its ground floor.

Early reports suggest that five fire brigades have rushed to the spot as several cars parked in the vicinity have been damaged and are being towed away.

A 70-year-old woman who was rescued from the Mahim building collapse was brought to the BMC-run Bhabha Hospital in Bandra gasping for breath. She succumbed within 5 minutes on her arrival at the hospital.

The deceased has been identified as Zaibunissa Abdul Sattar Laakha, the official said, adding rescue operations are still on.

Second casualty, as an old woman is pulled out dead from the debris. Atleast 8 are feared trapped in the building.

“One more woman and a man have been admitted to the casualty ward of Bhabha Hospital and attempts are being made to revive them. They have suffered from poly-trauma and head injuries,” said Dr Seema Malik, chief of peripheral hospitals, BMC.

A 45-year-old man has been admitted in an unconscious state to BMC-run Sion Hospital while two more injured people have been taken to BMC-run KEM Hospital.